Standing on a hill outside of Apollo, PA is a beautiful structure now housing the First Baptist Church of Apollo.  This building has a unique history which is shared below beginning with the biography of the man who was led by God to construct it.  The following information comes almost word for word from a booklet published by Peter Sabatelli.

Peter Sabatelli was born on May 29, 1897, at 10 o’clock in the morning, the son of Mario and Mary Sabatelli, in Noci, Province Di Bari, Italy.  His birth occurred on the Feast Day of Mary Magdalene.  Two weeks later he was baptized and received a beautiful, valuable ring  and a gold watch and chain from his Godfather and Godmother. He grew up a healthy child until he reached the age of 10 years when he took very ill.  The physician did all he could for him and everyone gave up hope of his recovery, unless a miracle would happen.

His father and mother had one hope left and that was to pray to God.  They asked Peter if he was willing to donate his watch and ring to St. Cosmas and he said, “Yes.”  He was willing to give up everything to get his health back.  His father and mother took him down to the shrine of St. Cosmos and he was so sick he could not walk.  He had to be carried to the buggy and they drove 15 miles to the shrine.

Peter was carried into the church and with his own hand placed the jewelry on St. Cosmas and prayed for his health to be restored.  God granted him that wonderful favor and he started in to help out his father in business.  When he was thirteen years of age he secured a job of driving a team of horses carrying dynamite from one mine to another.  He drove on Sunday to hear Mass at the church then returned to his job.  He did that until the war came on  (WW I) and he was drafted into the Italian Army, serving his full time.  He was a machine-gunner and prayed to God all the time he was on the front line and asked St. Cosmas to help him.

He left Italy on November 17, 1920, and arrived in Vandergrift, Pennsylvania on Thanksgiving Day.  He went to work at the steel mill there and helped build a new Galvanizing shop.  After seven months in the mill he went to work in the Vandergrift coal mine.  He left that job after three months and went into the produce business in Apollo on July 14, 1922.

He started a store on Warren Avenue between Fifth and Sixth Streets.  Then branched out to two stores when he went into the Calderone building on Warren Avenue between Second and Third Streets, then started another on McKinley Avenue in Vandergrift.  When the depression came along he closed two stores and kept the one in Apollo.   In 1937 he purchased the building on the corner of Second Street and Warren Avenue and expanded his fruit business to include groceries and meats. While being in business he sent money to his parents in Italy and part of that money was designated to go to St. Cosmas to have a mass said.

On February 15, 1926, he was married to Mary Josephine Spaniel of Vandergrift, Pa.

Though doing a thriving business, he gave it up later, to devote his entire time and life to the building of the Shrine of St. Cosmas and St. Damian.  He resided in an apartment over the store and it was in this residence that he received messages from God.  Whenever Pete was visited by St. Cosmas, the saint always ended by saying, “Goodby, good luck, and God bless you.”

Some Of His Visions And The First Chapel

On March 16, 1935, Pete Sabatelli had his first vision from St. Cosmas while lying in a sickbed.  St. Cosmas was accompanied by six little angels.  He set up a chapel in his apartment dedicated to St. Cosmas and St. Damian.  He was told in one vision to open this chapel or shrine to the public.  It was opened on Sunday morning, March 17, 1945 at 8:30 o’clock.  Pete’s wife Mary lit an oil lamp in the center of the shrine which was to burn perpetually.  Mary Sabatelli, surrounded by six young ladies depicting angels as they have appeared to Pete in former vision, led in a short prayer for peace.  The young ladies promised to pray every evening at 9:30 and every Sunday afternoon at 3 o’clock for nine weeks.  The young ladies taking the part of the angles were Rose Panza, Jenny Locorotondo,  Rose Albini, Mary Maietta, Frances Ceraso, and Carmel Panza.  Also present was a photographer who took many pictures of the Shrine, and a write who took notes on everything that went on. 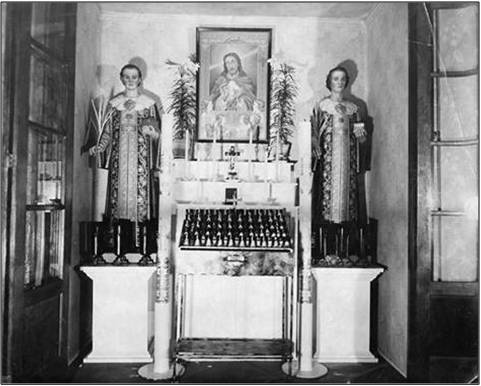 At 8:45 a.m. Pete entered the room.  He lit the six altar candles, the six large votive lights and the two miracle candles.  Pete then took a prayer book and asked the six angels to kneel down around him.

Pete then repeated the message that was given him by St. Cosmas on October 28, 1944.  He said, “There never will be peace, up to this morning.  God never lies.  We will offer to pray for peace now.  God bless us.”

Pete then knelt down, and looking up to Christ’s picture, prayed silently.  Rising to his feet, he prayed in front of St. Cosmas and St. Damian.  His wife Mary then lit an oil lamp in the center of the Sanctuary where it will burn forever.  Surrounded by the six girls representing the Angels as they appeared to Pete in prior visions, she offered a prayer for peace.

His twelfth vision instructed him to go through with publicizing his visions and this booklet is a result of that vision  He was helped by Father Cox of Pittsburgh who spoke about the visions in a series of Sunday morning broadcasts over a Pittsburgh radio station.  Donations have been pouring in from everywhere, asking for a copy of these visions.

“Thy Will Be Done”

In order to carry out the wishes of St. Cosmas,  Pete Sabatelli on Jan. 31, 1946, purchased 2 1/2 acres of land from Ban Owens in Kiski Township on the Apollo-Indiana road (now Rt. 56), overlooking Apollo borough.

In accordance with the instructions received in the vision, Sabatelli purchased the land with his own money and did not use any of the money received in donations.

The shrine, according to his instructions, was to be built in 1948.  The building of the Shrine was started on May 29, 1947 and was completed November 10, 1948.  All the donations received were used solely for the building of the shrine.  Everyone who believes in God is always welcome at the Shrine of SS Cosmas and Damian.

Scrupulously fulfilling every request received in the apparitions of St. Cosmas, Peter Sabatelli having spent every cent of his own fortune and all the donations received, worked tirelessly to bring to completion and for the greater Glory of God, the new Shrine to St. Cosmas and St. Damian.

Though an insignificant tool in the hand of God, with His help, he accomplished what was requested of him.

On a hillside facing Route 56 a mile East of Apollo, Pa, there stands for the everlasting Glory of God the most beautiful stone edifice — the House of Prayers — the Shrine to St. Cosmas and St. Damian, which as requested by St. Cosmas was opened to the public on May 29, 1949. 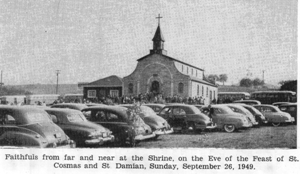 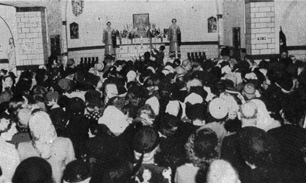 The Shrine was open to everyone who believes in God, from 8 A.M. to 10 P.M. every day.  On Sundays from 10 A.M. to 10 P.M.  Every Sunday at 3 P.M. the Holy rosary was recited and prayers offered for continued peace on earth from generation to generation.

Pete and Mary Sabatelli having devoted the rest of their life to the Glory of God and as servants of the Shrine to St. Cosmas and St. Damian, gave up their own home and lived in a house adjacent to the Shrine.

Postscript:  In 1974 the congregation of the First Baptist Church of Apollo bought the Shrine of SS Cosmos & Damien on Owens View and continue to have services there to the present day.