BACKGROUND OF THE CABIN

The Drake Log Cabin was built around 1816 although the earliest deed is dated 1862 when the cabin was sold to Mrs. Sarah Drake for $312.  The cabin was named for Mrs. Drake.

In 1925 Franklin and Mabel Garris moved into the cabin.  Mr. Garris passed away in 1928. In the 1930 census, 39-year old Mae B. Garris was listed as living at 416R Kiskiminetas Avenue with daughter Thelma Garris, age 13 and son Frank Garris, age 6.    Sometime before 1940, Mae married Ralph Shirey.  He also passed away before 1940 because the 1940 census shows a Martha Shirey, living at 416R, and at this time only her 16-yr-old son Frank is living with her.    So some records call her name Mae or May while others say Martha, typical of census takers of this era.   Mrs. Shirey remained in the cabin until she passed away in 1965.  Her gravestone has her name as Mabel Shirey.

The wagon came from Schall’s Farm in Kiski Township. 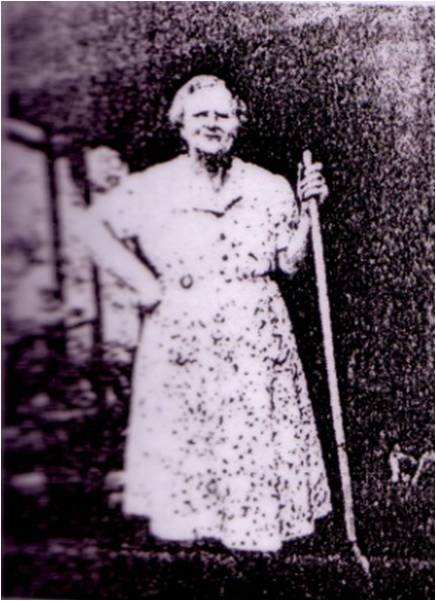 THE APOLLO AREA HISTORICAL SOCIETY IS FORMED AND WORK BEGINS…

In 1970 the Apollo Area Historical Society was formed in order to buy the cabin from Mrs. Shirey’s daughter Frances & son-in-law, Samuel Wilson.  The cabin needed much work to restore it to its original condition.  The porch was removed since it had been added, possibly by the Shirey family.

As the Apollo Area Historical Society began working, the windows needed replaced. as well as three logs.  The replacement logs came from a barn on Oscar Allshouse’s farm in Kiski Township. 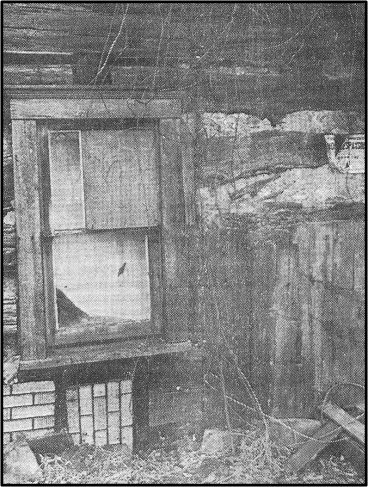 THE CABIN IS DEDICATED

The Drake Log Cabin was dedicated in a ceremony in September 1971 with President Abraham Lincoln in attendance.

On Arbor Day, April 17, 1976 an oak tree was planted to celebrate our country’s Bicentennial.  The picture on the right is the tree today.  It’s  northeast of the front door of the cabin. 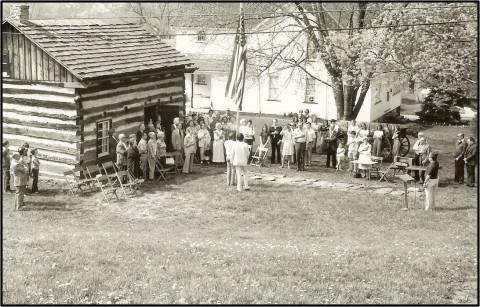 EXPLORING THE EXTERIOR OF THE CABIN

There are many special features of a log cabin.  The photo on the left shows window and the log & chinking construction.  Concrete mortar was used instead of the mud mortar because of durability.  The top right photo is of the springhouse which encloses a concrete cistern.  The springhouse was a source of water as well as refrigeration for the occupants of the cabin.  The lower right shows the waterfall & creek behind the cabin.  The outhouse was located somewhere in this area. 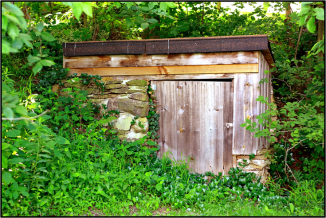 THE INTERIOR OF THE CABIN

Most of the furnishings are not original to the cabin but we attempted to furnish it with pre-Civil War artifacts to keep it true to the time period.

The pot-bellied stove that Mrs. Shirey used for heat and cooking was replaced with a field stone fireplace.  Inside the fireplace is a chimney crane used for heat control during cooking.  Below is the spinning wheel, butter churn, and a small table with a wash basin, pitcher, and grooming supplies. 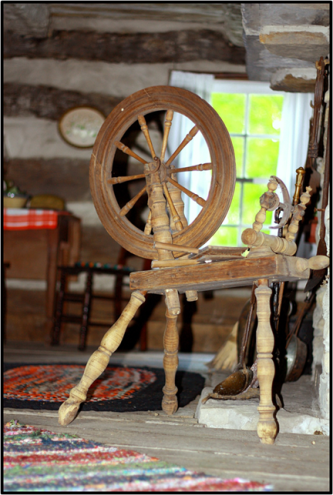 The bed is rumored to have belonged to Jimmy Stewart’s grandfather, General Samuel Jackson of Civil War fame.  A close-up shows the rope springs and straw filled mattress. The use of rope springs gave rise to the saying, “Good night, sleep tight, don’t let the bedbugs bite” because a person would sleep better if the rope was pulled tightly.  And with a straw mattress came the danger of bedbugs!  Under the bed can be seen the chamber pot which was useful if one didn’t care to use the outhouse at night. The sewing and knitting corner has an old treadle sewing machine as well as yarn that could have come from the spinning wheel.  The bedside table holds an oil lamp and some old books for bedtime reading. 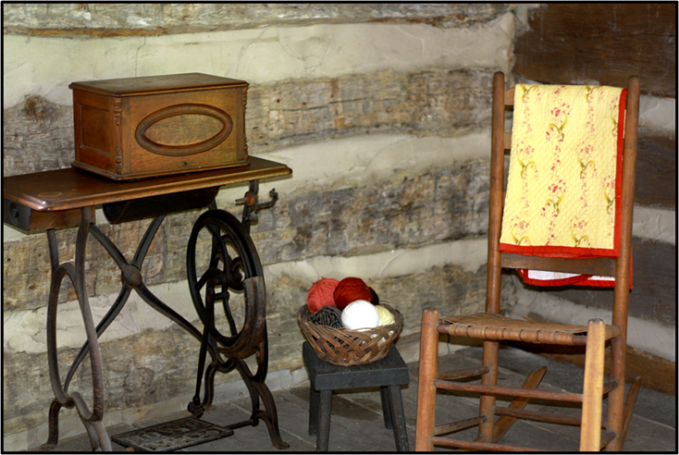 The cabin ceiling is very low.  For scale reference, Christine, the young lady in the picture below, is 5’5″ and can easily reach the rafters. Note the wide planks of the floor.  There are several handmade rag rugs scattered throughout the cabin. 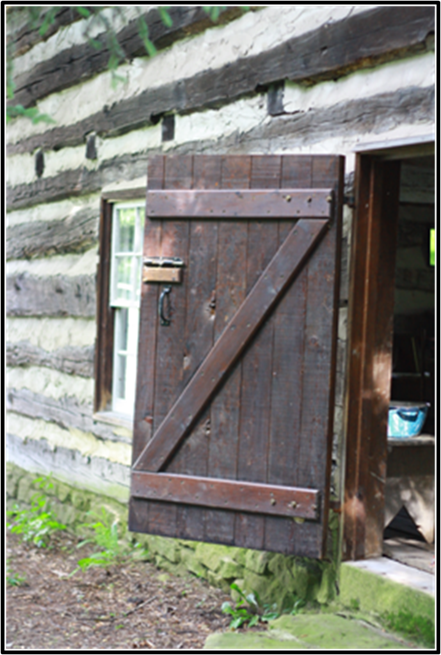 This is the back door of the cabin.  We hope you enjoyed your tour of Drake’s Log Cabin.  If you would like to view the cabin in person, please contact the Apollo Area Historical Society at 724-478-2899 or email at apollopahistory@gmail.com.  If you like our website, please consider a donation to the AAHS to keep our history alive! Thanks!   Cick here to donate.